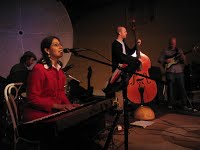 For over 25 years, Julia has performed in a variety of groups including reggae, Latin American music, jazz, hip hop, DJs, folk rock and flamenco jazz rock bands in the USA, Spain, Mexico and in Italy. Julia has performed at numerous festivals, museums, universities and music venues since 1984.

Originally from Philadelphia, she performed in numerous groups such as Tree of Life (reggae), The Humble Man Band (rock), Ulterior Motives (rock), Upper Dubland (reggae) and others. She co-founded The Delicious Life Orchestra with artists in Bologna, Italy and performed at The Container Club.

She also performed as part of the TSU Jazz Ensemble backing The Digable Planets in Houston, TX.

Her music has always been a voice for social justice as represented in the song, ¡No Me Olvides Justicia! about Central American death squads that bring violence and instability to nations. Another song, ¿Que Passara? asks what would happen if we took bosses, generals, presidents and put them in the same situations that others struggling to survive face every day.

She has performed internationally at Festival de Verano in Cantabria Spain and most recently with an international group of Italian and North American musicians forming The Delicious Life Orchestra in Bologna, Italy. While in Bologna, she performed at The Container Club and at LINK.

Julia created “Women in Eclectic Music”series with shows in Philadelphia and in Chicago.

She also performed at The Knitting Factory in New York City as part of Emancipate.

While in Chicago, she performed with several music groups including Ifficial reggae. She also assisted organizing several performances at clubs and theaters throughout the Chicago area.